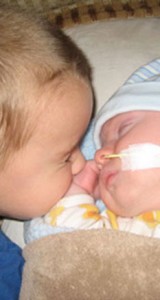 Lucas Scott Lilley was a 4 week-old healthy baby boy. On June 26, 2007 he became lethargic with a high fever. He was rushed to Los Robles Hospital Emergency Department where doctors discovered bacteria in his cerebrospinal fluid and blood. After being diagnosed with bacterial meningitis and sepsis, Lucas was quickly transferred to the PICU at Northridge Hospital for critical care. Due to seizures and extreme brain swelling, Lucas was airlifted to UCLA two days later for continuous brain monitoring. UCLA medical staff was not optimistic. Lucas received a devastating prognosis following the CAT scan and EEG. After doctors explained there was no hope for recovery, Jen and Scott Lilley held Lucas in hisfinal minutes. Life support was withdrawn and Lucas was placed on comfort care protocol. While friends and family prayed, Lucas occasionally gasped for breath. Minutes turned into hours, hours became days, and miraculously Lucas continued to breathe and maintain a normal heart rate on his own. UCLA medical staff gave Jen and Scott the option of taking Lucas home and caring for him there. Now at home with Mom, Dad, brother Ryan, and sister Lauren by his side, Lucas continues to make progress daily. He has already defied his prognosis; even his brain function is far beyond all predictions. Lucas is a miracle in the eyes of many! 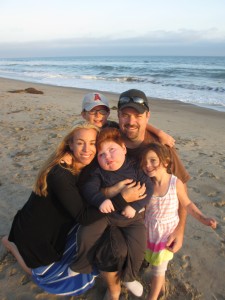